SoCal indie rockers Cold War Kids have been garnering fans and acclaim since the band’s formation in 2004, with a unique and constantly evolving indie sound, blending rock, pop and blues. Their fifth studio album, Hold My Home, was released on October 21, 2014.

In this all-new episode of Guitar Center Sessions on DIRECTV, Nic Harcourt sits down with Cold War Kids to talk about the band’s history, their songwriting process, how they’ve built a career through touring and what’s in store for the band’s future. Plus, watch exclusive performances from their set at the world-famous Guitar Center Hollywood—featuring material from Hold My Home, available now on iTunes. 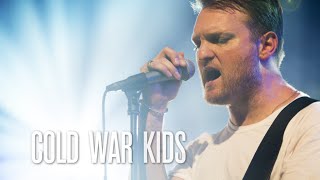 We Used to Vacation
Exclusive Video
‹ ›