All Time Low joins Guitar Center and DirecTV for an exciting live performance on Sessions. The Maryland-based band has emerged as one of the most popular new bands in recent memory, beloved by an increasingly fervent fan base for their fast-paced and fizzy brand of pop/punk, which is propelled by singer/guitarist Alex Gaskarth’s clever lyricism. Named “Band of the Year” by the Grammy Awards and charting on Billboard with their album So Wrong, Its Right, the group talks with Nic Harcourt about what it’s like to find success after forming in high school, their creative process over the years and their latest release, Don’t Panic—which pushes the envelope with their collaboration with a veritable who’s-who of producers, each bringing their own unique sonic stamp to the album. 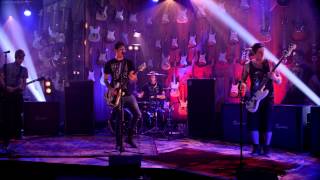